I went on a group hike today with an outdoor club that we've organized at work. It's challenging to plan events in Maine in April since the weather is unpredictable.  Case in point - earlier this week we had 4 inches of snow Monday followed by more snow on Tuesday, followed by 50 degree days on Thursday and Friday.   Today it was around 60 but foggy so visibility was limited.

Four of us went on the hike.  It was mostly mud with some ice mixed in, and there were limited views from the summit.   It was fun nonetheless, as it was good company.

This was almost the same hike my son and I had taken March 17th, but most of the snow and ice has melted. 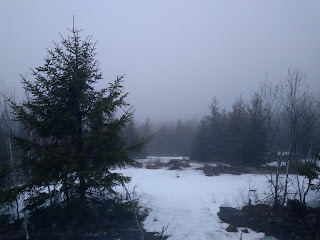