This morning I hiked up Mount Waldo in Frankfort.  The trail starts at the end of Mount Waldo road (roadside parking is available and encouraged with signage) and starts up a wide and very steep gated service road.  After a short period of time, the trail levels off with a more moderate ascent and slightly more rocky terrain.

The trail leads to a quarry, which while beautiful was marred by graffiti.

I wasn't really clear where to go once I reached the quarry so initially set off to the left.  This wound up being much more challenging than I had anticipated so I doubled back and went to the right of the quarry, where I found a well worn trail leading around the perimeter.  At the far end of the quarry, this trail intercepted an orange blazed trail.  I continued left up this trail to the summit.

Other than the area around the quarry and a few spots on the orange trail, it was relatively easy to navigate the area.

On the way to the summit there is a nice ledge affording views of the surrounding area.  The summit itself is bald with two cell towers and would likely have great views (it was fogged in this morning).

Overall this was a great hike and I'm happy to have found it as it's close to home.

My friends and I spent the day at Hidden Valley Nature Center.  We rented the Pond Cabin, hiked the 1.4 miles in from the parking lot and enjoyed a terrific potluck lunch, followed by an afternoon of canoeing and paddle boarding.

The Town of Veazie and Orono Land Trust work together to manage three contiguous properties in Veazie off of Route 2.  Combined, the McPhetres Forest, Davis Forest and Manterwood properties are approximately 33 acres and contain a variety of tree species, including white oaks and century old white pines.

I visited the preserve today while my son was volunteering nearby.  I had intended on visiting all three preserves; however, despite having brought a map and having maps located throughout the preserve, I made a wrong turn and wound up only doing McPhetres and Davis Forests.

I only encountered one other person during my hike, despite it being a beautiful Sunday afternoon.  The preserve is small and wedged between residential areas, but the immense trees give it a remote feeling.  Some of the trails were well maintained while others had vegetation encroaching on them.

A trail map of the preserve is available on the Orono Land Trust website.  Here is a map of my hike today.  The trail leaves the forest briefly when it reaches Davis Drive and re-enters a short while later. 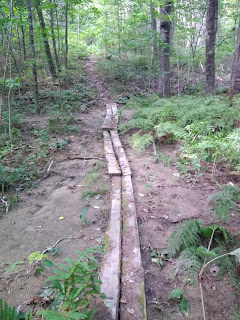 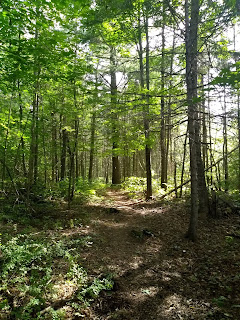 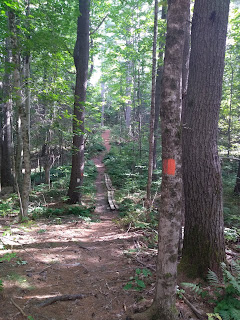 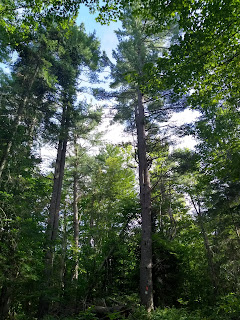 My son had a cross country meet in Presque Isle so we decided to turn it into a short overnight adventure by camping in Aroostook State Park and hiking early the next morning.

In the off-season, camping is first-come first-served at the park, although on Friday night the campground wasn't crowded (there were approximately six other occupied campsites).  Our campsite was basic (flat ground, fire pit, picnic table) but served its purpose well.  With temperatures in the 40's, bugs were not an issue and the area was very quiet.

The campground has warm showers and flush toilets, as well as a covered kitchen building with a sink, electrical outlets, picnic tables and electric lights.

In the morning, we woke and hiked up the South Peak trail of Quoddy Jo Mountain.  The trail was short (around 1/2 mile to the summit from the campground) but very steep.  At one point, the hike requires a rock scramble.  There is a view from the trail near the summit, but the summit itself is forested with no view.  We descended using the Ridge and Notch trails, which were not as challenging as the South Peak trail.

Although short, the hike was challenging, especially for my son since he had run a cross-country race just 14 hours before.  As we admired the view from the South Peak trail, a large hawk came swooping down and landed in a tree.  It was close enough that we could hear it's wings flapping.

Overall, we greatly enjoyed the brief time we spent at the park.

Here is a map of our hike.

Our boy scout troop went camping at the Hidden Valley Nature Center this weekend.  We stayed in the yurt (see my prior yurt post here) and then went fat tire biking in the morning.  The Center makes the bikes available to groups that are using the Center as well as local schools in the area (see its website for additional information).

I visited Hidden Valley Nature Center (HVNC) today to meet with a representative of the MidCoast Conservancy in preparation for an upcoming scouting event.  While there I hiked down to the Pond Cabin and canoe launch area.

HVNC consists of over 1,000 acres of wooded land owned and managed by the Midcoast Conservancy.  The property has miles of hiking trails, rustic overnight cabins and campsites, and canoes for use on Little Dyer Pond.

Here is a map of my hike.  For more information about HVNC, you can visit its website.

Hammond Pond is a 100 acre lake in Hampden.   I had a busy day on Sunday but wanted to take advantage of the beautiful weather, so I took a quick trip out to Hammond Pond.
The pond can be accessed either from Hermon Pond or from a private boat ramp off of Bog Road.   The Bog Road ramp charges a $1 fee as of the time of this post.
The river leading to Hammond Pond passes under and then adjacent to I-95, so the trip lacks a remote feeling, but the lake itself is still beautiful.
Here is a map of my visit. 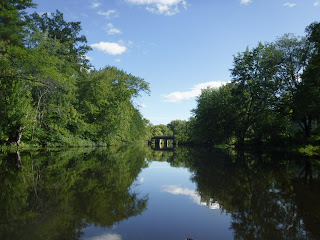 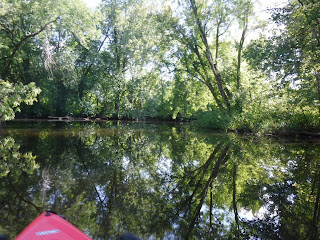 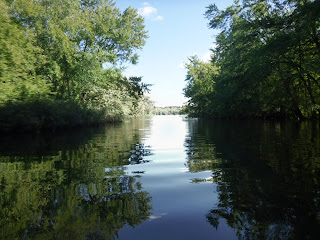 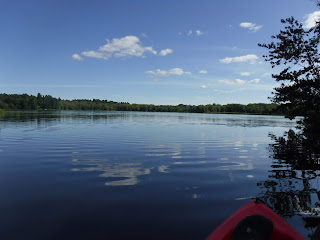 Eric
I've lived in Maine for 20+ years. For 5 years in the mid 90's I worked for the National Park Service in Virginia and Maryland. Since that time I've been working in white-collar jobs, but still love the outdoors and try to get outdoors as often as possible. My goal for 2019 was to get outside every weekend and do something. I achieved that goal, continued through all of 2020, and am still continuing into 2021.