My younger son and I spent the weekend at Camden Hills State Park.  We arrived Saturday afternoon and hiked two miles to the park's ski shelter.  On Sunday we hiked from the shelter to Cameron Mountain and back.  We hiked down from the shelter Monday morning.  Here is a map of our trip.

The picnic area and toilet get used by park visitors during the day.  In addition, although the shelter door has a lock on it, you aren't given a key and so expect to have people entering when you aren't there to look around.  You can, however, lock the door at night.

The shelter is located in a cell phone dead spot and we had no reception with either Verizon or AT&T.

There is no potable water at the cabin, however there is a nearby stream and a hand pump across the trail from the shelter that pumps untreated stream water.  The park supplies fire wood both inside and outside the shelter.

The shelter is a replica of a Civilian Conservation Corps cabin that was built here in 1938, used for a period of time, and which then fell into disrepair.  The old cabin was destroyed in 2003 and the rebuilt using the original blueprints in 2005.  The stone floor, foundation and fireplace are from the original cabin.  The cabin can be rented for $50 per night and is insulated for winter use.

We hung around the shelter when we weren't hiking and it gave me an appreciation for a side of Camden Hills State Park that I hadn't seen before.  We saw several runners and bikers go past, and met several local people from the Camden area that stopped in, either to use the toilet, the picnic area or just to chat when they saw us sitting by the campfire.

The shelter is very quiet at night. 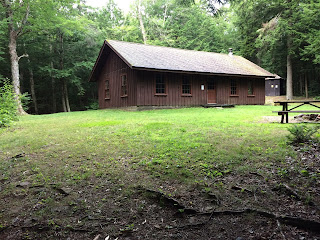 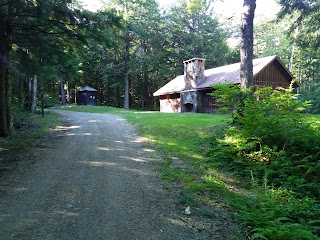 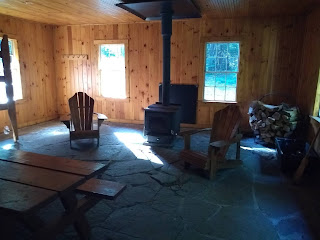 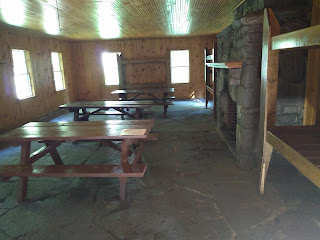 On Sunday we set off to hike to Cameron Mountain.  Located in a rear corner of the park, Cameron Mountain gets significantly less visitors than other mountains in the park but it provides 360 degree views from it's bald summit.  We took a loop trail to get there, hiking around 5 miles total from the ski shelter. 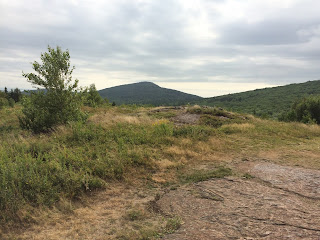 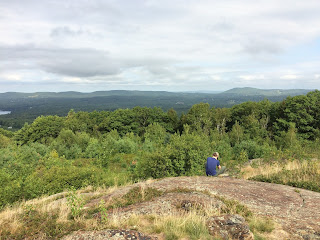 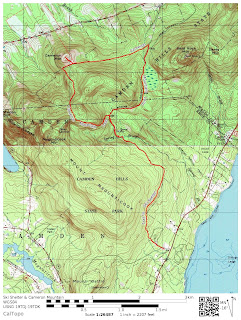